How to Stammer Grammatically: Reduplication

Linguistic signs are mostly arbitrary in the sense that their form is not directly related to the concept they express. For example, there is nothing in the phonetic shape of the Malay word ikan to suggest its meaning – ‘fish’, or, by extension, any ‘marine animal’ (turtle, whale, oyster, etc.). The sound of the word is not intended to evoke swimming or splashing. It is just a regular historical reflex of Proto-Austronesian *Sikan (with the same meaning and also an arbitrary phonetic shape). It has cognates in other Austronesian languages, for example Hawaiian i‘a [ˈiʔa]. None of them makes you say to yourself, “Methinks it is like a fish.” Indeed, even if a word starts out as onomatopoeic, sound changes will in the long run alter its pronunciation beyond recognition, eventually reducing or destroying its imitative value (see the etymology of English pigeon).

Affixes and auxiliary words are usually not iconic either. English regularly indicates the plural number of nouns with the suffix -(e)s (pronounced [s, z, ᵻz], depending on the context); some nouns (including fish) form endingless plurals. Neither the suffix nor its absence “portrays” plurality, whether by resemblance or by analogy. The same can be said of irregular plurals like goose : geese or child : children. Is it possible at all to express plurality iconically – that is, to make a linguistic sign sound plural? Yes, it can be achieved by amplifying the sign itself to indicate “more of something”; and one simple way to amplify it is to repeat it. Malay nouns are not inflected for number. Plurality, if it matters in a given situation, may be signalled by the use of numerals or quantifiers, or just inferred from the context. But the speaker may also choose to emphasise the multiplicity of referents by doubling the noun: ikan-ikan ‘fish’ (plural). This is similar to emphatic repetition occasionally encountered in all languages, including English, as in:

We rode for miles and miles.
What do you read, my lord? ― Words, words, words.

In English, word repetition is a syntactic phenomenon; in Malay, it is used as a word-formation mechanism. Note, by the way, that many Malay nouns obligatorily consist of a double occurrence of the same sequence and have no simplex counterpart, e.g. biri-biri ‘sheep’ (singular and plural), while others change their meaning if doubled (mata ‘eye’ : mata-mata ‘spy, detective, police officer’). Root-doubling can also be used with adjectives to indicate intensity (her wild, wild eyes could serve as an English analogue), and with verbs to indicate repetitive or prolonged action. In those cases the doubling is definitely iconic. But duplicated verbs may also refer to a sloppy or leisurely execution of an action, e.g. makan ‘eat’ : makan-makan ‘peck at the food’ (showing lack of interest or appetite). Here the iconicity is less self-evident.

The technical term for such morphological doubling is reduplication. In the Malay examples above the entire root is faithfully repeated, but numerous languages also employ partial reduplication in which the repetition is just hinted at rather than applied in full. Typically, a fixed pattern of consonants (C) and vowels (V) is used as a simplified copy of the morphological base – most often a CV or CVC template. Sometimes only the consonants are copied from the base, while the V position is filled by a fixed default vowel (e.g. [ə]).  Depending on the language, the copy may be attached before the base (as a prefix) or after it (as a suffix), or even inserted inside it (as an infix). The copy is usually called reduplicant, but I prefer the handier and less esoteric term echo. We shall be mostly concerned with reduplicative prefixes, that is cases when the echo is placed before the base. For example, in Yucatec Maya CV reduplication is employed to form intensive adjectives and intensive or iterative verbs:

Partial reduplication of this kind is not unlike stammering, which may also involve incomplete syllable repetition: b—b—black [bəbəˈblæk]. Of course there is an important difference: reduplication is controlled by the speaker, while stammering is involuntary and has no grammatical function.

Expressing plurality, intensity, repetition or, more generally, “greater degree” is the most natural use of reduplication, with a clear cognitive motivation. However, once adopted as a derivational or inflectional device, reduplication easily acquires secondary functions, gradually dropping its iconic character and evolving into another “arbitrary” morphological tool. Reduplication, in its numerous variants, has a global distribution. It’s only in a circumpolar belt of the northern hemisphere, including Europe, Northern Asia and the northernmost part of North America that reduplication plays little role in derivational and inflectional morphology. From a Eurocentric perspective grammatical reduplication may look exotic; we shall see, however, that it had important functions in Proto-Indo-European and some of the languages descended from it. 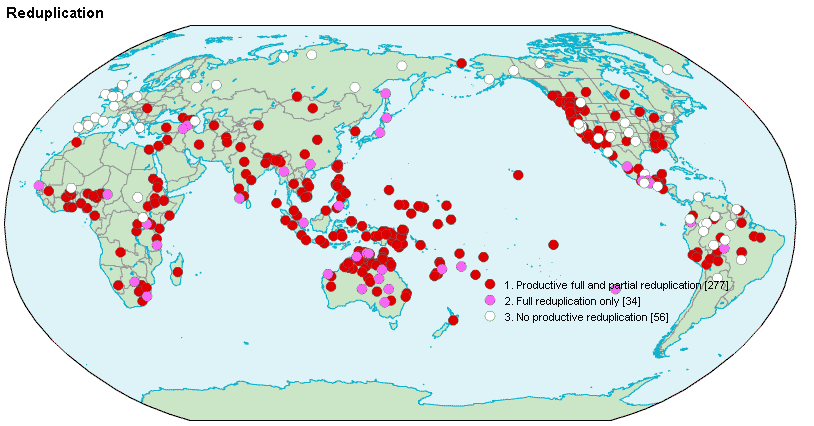 [REDUPLICATION: back to the table of contents]
Posted by Piotr Gąsiorowski at 00:59